Defensora is a documentary about a Mayan Q'eqchi' resistance against mining in Guatemala. The story is set along the shores of Lake Izabal in the community of El Estor where a nickel mining company has operated for over 50 years. Tensions run high against a backdrop of pro and anti-mining camps, violence and forced evictions. The film takes audiences into the lives of defenders in the resistance who struggle to reclaim their ancestral lands and seek justice in Canadian courts for alleged human rights violations.

TORONTO, ON — 6kidsProductions and Girl Edge Films, in partnership with Rights Action, announces the lineup of premiere screenings of Defensora in Ontario, the Maritimes and British Columbia, October 26 - November 1/2013.

Defensora documents the historic and on-going land and community defense struggles of Mayan Q’eqchi communities in eastern Guatemala, and their struggle for justice and remedy in Canadian courts against the nickel mining company Hudbay Minerals.

Winner of the International John Basham Award, at the 2013 Columbia Gorge International Film Festival, Defensora follows the story of sisters Maria and Angelica Choc, who lead a Mayan Q’eqchi resistance in Guatemala to reclaim ancestral lands and seek justice in Canada for the murder of Angelica’s husband, the shooting-paralyzing of German Choc Chub and the gang rapes of 11 Mayan women.

Set along the shores of Lake Izabal, where tensions run high against a backdrop and history of violence, intimidation and forced evictions, the stakes are high for the Mayan Q'eqchi people who risk their lives to protect their lands, speak the truth and seek justice in Canadian courts, and for Hudbay Minerals that continues to deny their allegations.

“Defensora is a timely documentary that provides candid insights into the brave struggles of Angélica, German and other Maya Q'eqchi' women and men in El Estor, Guatemala who, faced with the grave harm that Canadian mining operations have brought about, are on the frontline of the battle for justice in Canadian courts.” (Jen Moore, MiningWatch Canada)

SCREENINGS – WHERE AND WHEN.
• October 26 in Toronto, Defensora premieres at OISE Auditorium at 7 pm. Sponsored by: Rights Action and Science for Peace. A panel presentation hosted by Rights Action will follow. Guests include Angelica Choc, Producer/Director Rachel Schmidt, Executive Producer Lee K. Toepfer, Klippensteins Barristers and Solicitors, and actress and activist Tantoo Cardinal.

In the Maritimes, screenings are sponsored by the Maritimes-Guatemala Breaking the Silence Network and will feature special guest Angelica Choc. 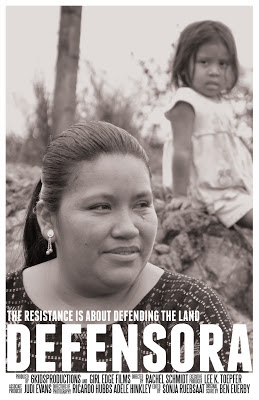 We have recently launched a fundraising campaign with Rights Action for distribution in Central America. Over the years the film industry has changed drastically, opening up possibilities to promote films as independently as they were produced. Having completed our production and post-production budget, we are currently raising money to help fund production of a full Spanish language version for distribution in Central America.

We are now asking our fans and supporters to make one last push with us to help the film become available in Central America. We want to return the stories in the film to the Mayan Q'eqchi people and to groups in Central America who need an inspiring tool and story that can shine a spotlight on unjust and harmful mining policies.

Toronto, Ontario - On March 4 and 5, 2013 an Ontario court judge will hear arguments regarding the preliminary legal issue of whether a Canadian mining company’s head office can be held legally accountable for human rights abuse committed at its subsidiary’s on-the-ground operations.

This is the first court hearing in the cases after Hudbay abruptly dropped its argument that the lawsuits should be heard in Guatemala.  Angelica Choc, the widow of murdered community leader Adolfo Ich Choc, has traveled from Guatemala to attend in person.

Hudbay continues to deny all responsibility for the rapes and shootings allegedly committed at its former mining project.   In this hearing, Hudbay is arguing that its head office simply does not owe a “duty of care” to Mayan families and subsistence farming communities harmed by its mining operations.

“After repeatedly assuring the Canadian public that it respects human rights at its mine in Guatemala, Hudbay is now hiding behind its corporate structure to deny any possible responsibility” said Murray Klippenstein, lawyer for the Mayan Plaintiffs.

“If these rapes and shootings happened at Hudbay’s mine in Flin Flon, Manitoba, I can’t imagine that Hudbay would say it simply wasn’t head office’s problem. Canadians would never stand for it.  And they shouldn’t stand for it here.”

Amnesty International Canada has been granted intervener status as a “friend of the court” and will be arguing that Canadian companies are under an obligation to respect human rights wherever they operate, particularly where the business is operating in a conflict-affected or high risk area, and where the Indigenous peoples’ lives and livelihoods are at risk.  See Amnesty International’s public statement.

The hearing will be heard by the Superior Court of Justice in a courtroom in downtown Toronto on March 4 and 5, 2013.  A decision on these issues will be released in the following weeks.

For more information: www.chocversushudbay.com.
Posted by Of Earth and Sky Film at 12:59

Justice for Survivors of the Rio Negro Massacre 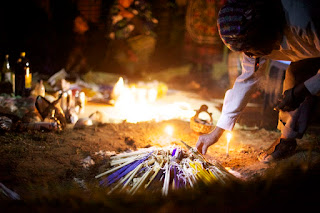 On our way back to Guatemala City we visited the communities of Rabinal and Pacux. We had the great privilege of attending a Mayan ceremony at 4 am this morning to remember the families murdered in the Rio Negro Massacre. More than 440 Maya Achi were killed in the village of Rio Negro between 1980 and 1982 during the construction of the Chixoy hydroelectric dam. For more than 20 years, Maya-Achi survivors have sought justice in the Inter-American court system. Last week their years of effort were finally recognized when the Inter-American Human Rights Court found Guatemala guilty of the violation of human rights against the communities of Rio Negro.
Posted by Of Earth and Sky Film at 22:19 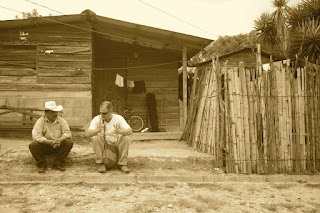 Spent the week working with activist Grahame Russell from Rights Action. He is our key contact on the ground in Guatemala and a huge supporter of our film. His heartfelt presence in these struggles is evident by the friendships and working relationships he has built with hundreds of campesinos in Guatemala, Honduras and Mexico. Rights Action provides direct funding to community organizations to undertake projects designed to strengthen community organizing. For more information, please visit www.rightsaction.org.
Posted by Of Earth and Sky Film at 22:04 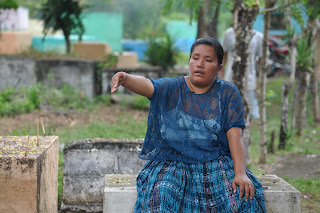 Yesterday we visited Adolfo's grave with Angelica's sisters Maria and Alicia. A very emotional and sacred candle lighting scene in the film. A few weeks ago the man accused of Adolfo's death was arrested, he remains in custody. The family is under pressure not to proceed with charges, but together they stand for justice.
Posted by Of Earth and Sky Film at 13:27