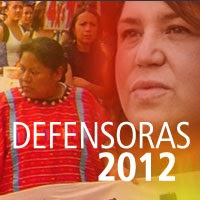 Arrived in Guatemala City this evening, we are getting very excited to meet the members of Nobel Women's Initiative Delegation tomorrow. We will join them for the duration of their stay in Guatemala. The opportunity promises to be engaging, inspiring and challenging.
Nobel Peace Laureates Jody Williams (USA) and Rigoberta Menchú Tum (Guatemala) will be leading a fact-finding mission January 21 to January 31 to investigate violence against women in Mexico, Honduras and Guatemala.

The Nobel Women’s Initiative’s delegation is comprised of highly-respected women journalists, filmmakers, performing artists, indigenous activists and human rights advocates from the US and Canada. They will focus on the unique circumstances of women—including why sexual violence is used as a tool to silence women’s human rights defenders—and the strategies women on the ground are using to end violence in their communities.

The delegation will communicate what it learns from women’s groups to decision-makers at the high-levels of government in Mexico, Honduras and Guatemala. Following the delegation, the group will release a report with recommendations aimed at governments in the region, as well as at decision-makers in the US and Canada. Other long-term follow-up to the delegation will include events and outreach aimed at raising the profile of women’s human rights defenders in the region, and achieving a commitment from governments in the region—as well as the international community—to end violence against women. This delegation is a strong expression of the Nobel Peace Laureate’s commitment to supporting real change, grounded in experiences and perspectives of women.

For more information check out:
http://nobelwomensinitiative.org/our-blogs/defensoras/

Thanks to the NWI for writing the information in this post.
Posted by Of Earth and Sky Film at 21:39