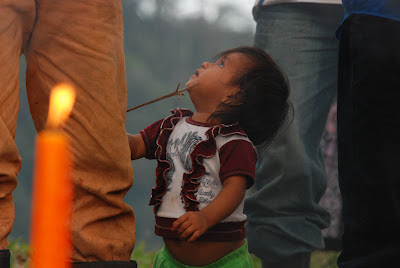 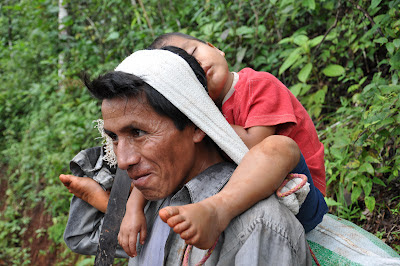 Yesterday was 'one of those days' that we will remember for the rest of our lives. We traveled for over an hour to a drop off point where a 4x4 truck picked up us. I rode in the front with the camera gear and Adele was in the back bracing herself against a roll bar along with several community leaders and elders. The truck climbed straight up an eroded mountain road for another hour until we arrived at the top. As we crested the last hill we saw a large Mayan community waiting for us. They greeted us warmly and it was here we met the Mayan Q'eqchi' women and listened to their stories. They led us in a quiet procession to the sites where their houses were burned to the ground and the rapes occurred. Through tears they told us they had paid for the land we stood on with their bodies and the babies they had lost after the rapes.

After sharing a meal of tortillas, chicken, rice and beef, we walked several miles into the mountains to where a new community has been built since the forced evictions in 2007. It was like we had entered another time and place. The mountain path wove around lush green jungle and every corner held a spectacular vista. The men walked behind us with machetes, bundles of rice and babies on their heads and the women walked bare foot through the red clay mud. We on the other hand were covered up to our knees in red mud!

Finally we arrived at a serene, beautiful and orderly Mayan village with gardens of pineapples, tangerines, bananas, plantains and guiskil (similar to our acorn squash) and harvests of cardamom and achiote. We were greeted by the elders in a sacred clearing overlooking several mountain ranges. They began the preparations for a Mayan ceremony. These ceremonies are never allowed to be filmed but we were given permission to witness the ceremony and record it. Five elders placed four bundles of copal pum incense in a fire pit, and stood large yellow candles in all directions to appeal to the heart of the earth and sky, and smaller white candles encased in glass were positioned between the yellow candles to remember the grandparents who had passed away. One of the elders began a prayer and then the entire community began to chant prayers, their voices rising with the smoke. All Mayan ceremonies have a purpose and this one was intended to bring safety to the community spokespeople, the community development committee and the women involved in the lawsuit against the mining company.

Afterwards we joined the community leaders and elders for caldo (a spicy beef or chicken soup), tortillas and coffee. As the sun was setting we said our goodbyes and hiked out to the truck waiting for us and rode down in the dark. Words do not do justice for the incredible day we had, but I hope the film footage will give you all a vicarious experience.

This morning we said our goodbyes to our companeros and companeras and made some commitments to the communities we visited. These people have become our friends and we will do our best to support them in their resistance against mining and in their efforts to reclaim their lands. Lastly we want to acknowledge our amazing crew: Juanita, Edvin, Mark, the Committee and Rights Action for their outstanding work.

Until we meet again Guatemala.
Posted by Of Earth and Sky Film at 20:29