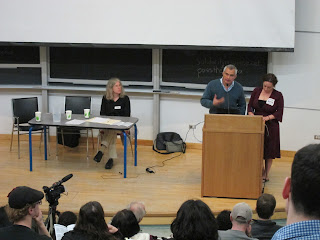 Last day in Toronto did not disappoint. We spent some time at the mining injustice conference and learned some startling facts about the number of people in Central America who have been disappeared or murdered due to labour or land disputes with trans-national companies. There was a plea from the presenters to divest our interests and stocks in companies with bad human rights and environmental records. The lawyers presenting spoke about the legal landscape changing and the real possibility that companies will soon have to be accountable for crimes they commit in other countries.

We finished the day with two documentary screenings. 'One Day After Peace' is about an Israeli mother whose son is killed by a Palestinian sniper. The film follows her journey as she explores the possibility and nature of forgiveness and decides whether to seek out a meeting with her son’s killer, who lost his own family to Israeli soldiers long before taking up a gun himself. It was very interesting and we highly recommend it. The second film was called 'My Name is Faith'  a story about a 12-year-old girl with attachment disorder. We gave it mixed reviews.